Why I Hate the Math Teacher 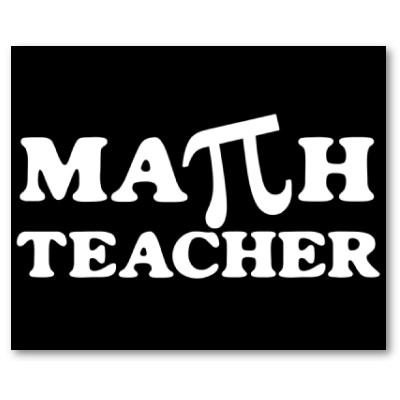 WHY I HATE THE MATH TEACHER
GUEST POST BY ANDY WHITE

*@andywhitedc is a DC resident, author and social media manager. His first guest post depicting yet another bad date and entitled "The Layers" can be found here. His second and third posts, also about a bad date (see any patterns here hmm??) "Muted Lights, Small City" and Two's Company, Four's a Bitch can be found here and here. In case it wasn't obvious from the entry's title, Andy doesn't like the new guy I've been dating. It's not serious, I'm completely on the rebound and I don't even treat him well. So I'm not sure why Andy's so against him but here are his thoughts on Mr. H anyhow...

Why 'the teacher' is everything that is wrong with men in today's society:

I recently posted a comment that indicated my dislike for 'the teacher' in succinct and somewhat blunt terms. A 'Heather' responded indicating a desire to see this blown out into something more substantial Heather, this is for you:

The teacher represents a crawling manifestation of everything we seek to avoid as we traipse through the human experience. At first, and in small doses, this man is amenable and sometimes even affable. He is at the outer extremities of your group, the type of rogue with whom you would never hang out 1 one 1, but he's always there, always looking. Angular and awkward in construction, there's a sharp movement in his step, as though always ready to slip his hand somewhere unwanted.

He will go for the weak and the vulnerable. Recently broken up, emotionally damaged, desperate for affirmation of their beauty; that they are thin, that they can get over it, that they do actually like giving head, really, truly. That's his specialty, that's his wheelhouse.

In this particular instance our villain knew of the pain dear MM was going through. This was out in the open and it was clear and it was very true. He sat there, he said the right things, he put a consoling hand on a damaged knee. He saw a girl that was at her very lowest ebb, a girl that needed an arm, a hug, words in her ear to let her know everything will be alright. Really. She was desperate for someone to push $20 into the hand of a cabbie and send her home. She was desperate for someone to care, for someone selfless, for someone who didn't think with his vile wick.

He was none of those things. He was her worst nightmare that night.

Lest we forget the group of friends that were present that evening, and I for one will never forgive, never forget. They saw first-hand his moves, his lines, his darting tongue and thin words. They could have surrounded MM like on the Serengeti and ushered him back to the dark visages of his mind, from where he came and where he will ultimately return. But they didn't. They were complicate. They pushed MM into the waiting clutches of a man designed to suck the life out of those around him because he knows of nothing but pain.

That's probably why I hate 'the teacher' and everything he represents. Scum.

Labels: dating, on the rebound, The math teacher

I'll say the same thing I said back in "Post breakup: day 2" when the Math Teacher first made his appearance...

I'm with andy on this... though I'm not sure I would have put it quite that way.

The thing is though, Toddy is a grown up. She certainly hasn't mentioned that she felt he took advantage of her, and while it's possible Math-boy was a predator on the serengeti, it's possible that he's just a nice guy. She did, after all, ask to take him home with her, not the other way around.

Besides, if he was really just going in for the kill, would he still be semi-dating her? As a non-male member of society, perhaps I am just giving your gender too much credit?

I think Andy, while blunt, and abrasive, is right... but, ultimately, its for Toddy to decide what type of approach is right for her... and if he treats her well, and they have fun, I don't see the problem, however much I may not like the guy myself.

Andy- thanks for guest posting. And for your vehemance. (I think.) (gulp).

vvk-I'm fine with it. And I'm always safe.

Susanlee-If I'm a grownup does that mean I'm old too? Damn I am old now aren't I - bah.

StormKat-you surprise me as a liberated woman of the world to be against. Other than taking me home - when I asked him to take me home - what has he done to be so bad? hmmm..

Thanks for all the comments guys,
T.

Andy- thanks for guest posting. And for your vehemance. (I think.) (gulp).

vvk-I'm fine with it. And I'm always safe.

Susanlee-If I'm a grownup does that mean I'm old too? Damn I am old now aren't I - bah.

StormKat-you surprise me as a liberated woman of the world to be against. Other than taking me home - when I asked him to take me home - what has he done to be so bad? hmmm..

Thanks for all the comments guys,
T.

If Andy's guest post gives all of us readers food for thought, I can't imagine how it makes Toddy feel. Interesting to see where this goes and happy to see that all of us want MM to be in a good place! xoxo

I haven't read this post in a LONG time. In case anyone ever happens upon it again I thought I'd mention- we've been together a year and a half, share an aptmt and he's the nicest guy I know. Cheers!