A Date with a Unicorn Part 20: Valentine's Day 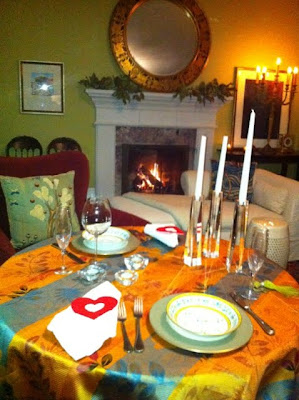 Mr. U had told me in advance that he would be working on Valentine's Day. No surprise there. So I had asked him to make time, any time, to come over on Sunday evening, Vday Eve, to my place, and I would do the rest. And boy did I ever. I did it all.

I made Julia Child's famous Beef Bourguinon, a simple salad and ridiculously sinful chocolate souffles. Yeah that's right, Toddy can cook. I set a beautiful table with the best china and glassware, in the living room, by a blazing fire. I had music playing in the background and lit a million candles. There would be champagne for toasting and red wine thereafter. When Mr. U arrived, it looked as magically perfect and romantic as the actual picture of my handiwork above.
What he didn't know was that when I'd first set that fire (yeah, I'm no caveman), I hadn't opened the flu. I mean I thought I had opened the flu. But I guess the flu was originally open and what I did, was to in fact, close the flu. Holy Bejeesus. Did I mention I was a walking disaster? Oh yeah, I think I have, here. After leaving the living room to check on my food stewing in the kitchen, I returned only to find a room full of smoke. HOLY GOD!!! Why is it so smoky in here? I called my brother on the phone in Los Angeles. "D!!!" I screamed at him, secretly thanking God that he had picked up his cell. "I don't want to alarm you, but how do you know when the flu is open?" "Um....why?" he asked me. "Because there is smoke everywhere. Is the fire just smoky or is the flu closed?" "Jesus, T. The flu is obviously not open." "Well, what do I dooooooo?" I screeched. "Whatdya do?" he responded incredulously. "You open it." "But its so smoky, thats haaaaaaaaaard," I said back. "Um yeah," he said, that's why you do it first, numbnuts." (I don't know why my brother calls me insults from like the 3rd grade. But yeah he still does. Doodoohead and shitforbrains are sometimes utilized by him too).

So I took a kitchen towel in my hand and headed over to the fireplace. Covered my eyes, burning and stinging from the smoke, grasped the flu chain with another kitchen towel and opened the flu. The smoke started rising up the chimney almost immediately. But shit - this room was still smokey. Shit. Shit. Shit.

By biggest concern with Mr. U finding out how ridiculously incompetent I am, is that reasonable men don't want to marry the kind of woman that will accidentally burn the house down, with his children in it, while he is out of town on business. Nor do they want the kind of wife and mother that will slip and fall and drop her babies on their heads on a regular basis. These are not attractive qualities in a caregiver.


Fortunately, however, the living room has french doors that lead out to a back porch and the fresh air beyond. I opened the french doors, letting the cool air flood in and drafting the smoky catastrophe out. Then I went around the room spraying air freshener like a crazy person, and hoped he wouldn't notice. Crisis averted.


When Mr. U arrived, everything seemed calm and pretty. He came through the front door and wrapped his arms around me. He brought champagne and he gave me this cute little Valentine candy-heart themed barrette. (okay so I wear barrettes, I'm like 5. Get over it). Then, when he saw the table, he was speechless. Later in the evening, all he would say was, "I can't believe you did all this." "I was happy to do it," I told him back. And I was. He would tell me the next day on the actual Valentine's Day in an email "Thanks again for such a wonderful night. I owe you one fantastic date" and then later in the evening when he was still at work and I had been long asleep: "The night drags on but I'm happy thinking of you." These small but heart-felt sentiments would make all the cleaning and cooking and flower arranging and candle lighting - completely worth it. 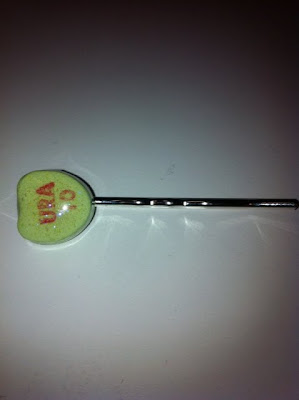 As it was, we sat in front of our nice china and clinked our champagne glasses. "I'm glad your my Valentine, " I told him. And he told me the same. And then the food was eaten and the wine was drank. And then we sat by the fire for what seemed like an eternity. The same fire that had nearly killed me just hours earlier was now a pleasant and polite companion. Sometimes Mr. U and I talked and sometimes we just sat in silence. We looked at the flames as they danced around jovially with mischievous intent.

At one of the first house parties we hosted in our new house, we turned on the fireplace to, you know, impress the guests. Didn't realize we hadn't opened up the flu until we started smelling gas. Oops!

And then to top it off, we turned our oven on to preheat it for something we were making, and it turns out since it was a brand new oven, there was still tape/styrofoam inside the oven...

I think our guests thought we were trying to kill everyone. ;)

oh wow. blame it on the growing pains of becoming an adult and doing things like throwing dinner parties and acting all mature and stuff. My parents make it look easy but I know its only because they've been doing it for 35 years. They've had a lot of practice. Hopefully I want make the same mistake twice and neither will you. You live, you learn. Thanks for the comment, T.

I see the day coming soon where you don't just let those thoughts stir in your head and heart, but you'll find them being spoken out loud. Happy you had such a great Valentine's Day!

ok, the much longer response is that it's good to think about him being a workaholic dad, but people DO change and you should work on shamu-ing him (look at the nyt modern love column about the big whale). it sounds like you already are.

AND also, you know, after 19 i was going to say don't forget to live in the moment - it's my new mantra in life - but then i read 20 and it seems you haven't. so rock on ladyfriend!!!!

aww! sounds like an awesome time together, despite the fireplace debacle ;) simplicity and well stated words between you two. I dig it.